As a Britten fan since my teenage years, I have always been captivated by the expressive depth, technical brilliance and sheer beauty of virtually all of his music. His handling of the orchestra in particular has had a great influence on the way I have approached my own works in this medium over the past decade. When, last year, Roger Wright of Britten Pears Arts commissioned an arrangement of Our hunter fathersI was naturally delighted – but also slightly cautious: Britten’s technique was fully formed by the age of 20, and reducing this shimmering, exquisite and at times explosive orchestral score to 12 instruments presented a whole new challenge.

The work, a 30-minute “symphonic cycle for high voice and orchestra” with text designed by WH Auden, was written in 1936 when the composer was 22 and is one of a handful of early masterpieces, including the Sinfonietta, Night courier, and A boy was born, one of the most sophisticated choral works in the repertoire. Although apparently a work on man’s relationship with animals – as parasites, pets and prey – on a deeper level, it is an uncompromising and passionate expression of the pacifist principles that Britten and Auden would stand throughout their lives, written when fascism erupted across Europe.

The Britten score [a page of which pictured left with Phibbs’ annotations] is full of unusual effects for the time, and it’s no wonder many audiences – including its editor Ralph Hawkes and Professor Frank Bridge – were taken aback after its premiere at the Norwich and Norfolk Festival. In one of the more radical sections, “The Dance of Death,” a breathtaking display of virtuosity with screaming orchestral glissandos and trill vocal effects, the solo soprano got stuck at the end to mutter “German” and “Jew” (names of dogs in a hunting pack) with frightening foreknowledge. Later, on the closing funeral march, a disembodied spectral xylophone, played in its lowest scale, slowly marks time before being overwhelmed by a series of twisted wind lines, the result sounding much like jazz. experimental (this is the section that most Bridge worried about).

The work has been duly undermined by many critics: “a terrible nonsense” (The observer), “Orchestral farce” (The daily telegraph), and “if it is a step to be taken, we wish it to take it quickly and safely” (The temperature). It’s certainly a far cry from the world of Holst and Elgar, who had both passed away just two years earlier. If Britten calls “Our Hunting Fathers” of pre-war Britain to account, he may also question his musical fathers, whose (in his opinion) outdated and sometimes amateur methods exasperate him, such as report it in the daily newspapers. he held out until the war.

There is indeed a certain rebellion and ferocity to this work, reinforced perhaps by Auden’s menacing presence, which is unusual in Britten. As a student his imagination had been ignited by European modernism, especially Schoenberg, Berg and Stravinsky, whose music he avidly absorbed in concerts and on the radio. Around 1930 he produced a series of unrecognizable pieces as Britten, fluid imitations in the mold of trends that had so excited him – and as he quickly retired, the influences were assimilated, if not harmonically, from the less by a complex method of manipulation and combining small melodic forms, while adopting a more nuanced approach to orchestral writing. The often chamber-like intimacy and delicacy of his orchestration are also foreshadowed in Mahler, another of his heroes – and in Schoenberg. [Pictured below: The Hebrides Ensemble in rehearsal for the Snape Maltings performance of Our Hunting Fathers] 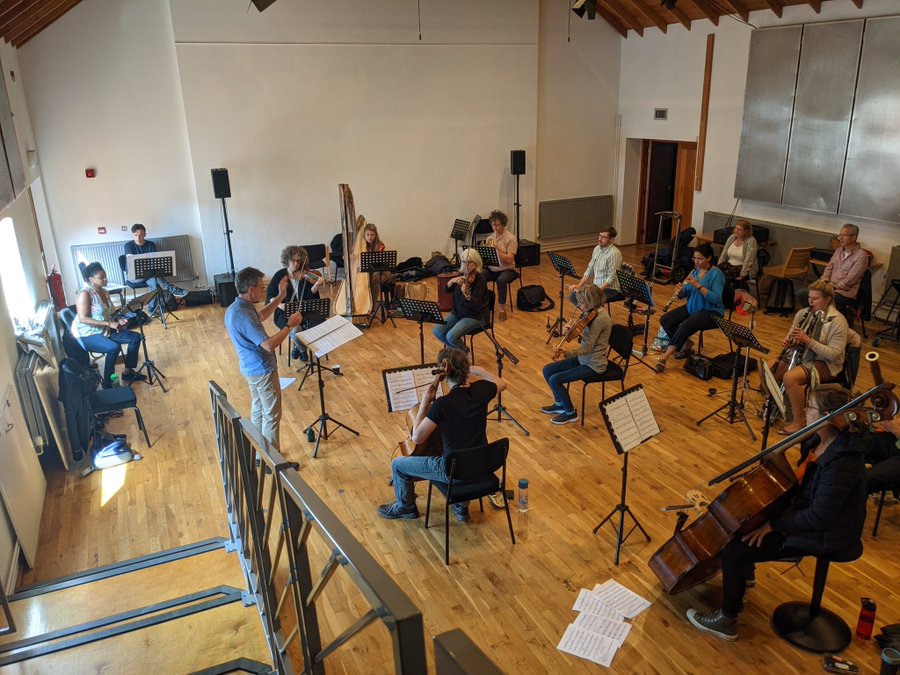 From the start, I was determined not to view the arrangement as a ‘compromise’, but rather as a full-fledged version: a distillation, as best I could, of the composer’s orchestral palette into a more instrumental form. small. My strategy was to keep the original score as much as possible, rather than imposing my own style, and elsewhere to imagine what Britten could have done within the confines of a chamber ensemble. Fortunately, the music is pretty seamless, and rarely does a knotty network of counterpoint present any serious problems, except (as mentioned before) in the last few pages, the more difficult challenge of the arrangement. It was often a question of which single instrument would best represent a combined sound (by replacing, for example, two flutes and a clarinet with an oboe in my arrangement), and at other times by substituting one instrument for another ( a timpani with a double bass pizzicato, or a saxophone with an English horn). I spent several days rewriting a particularly complicated string passage, only to tear it up and start over, not convinced that the delicacy of Britten’s original texture, which I had tried to approach, would work on a smaller scale. 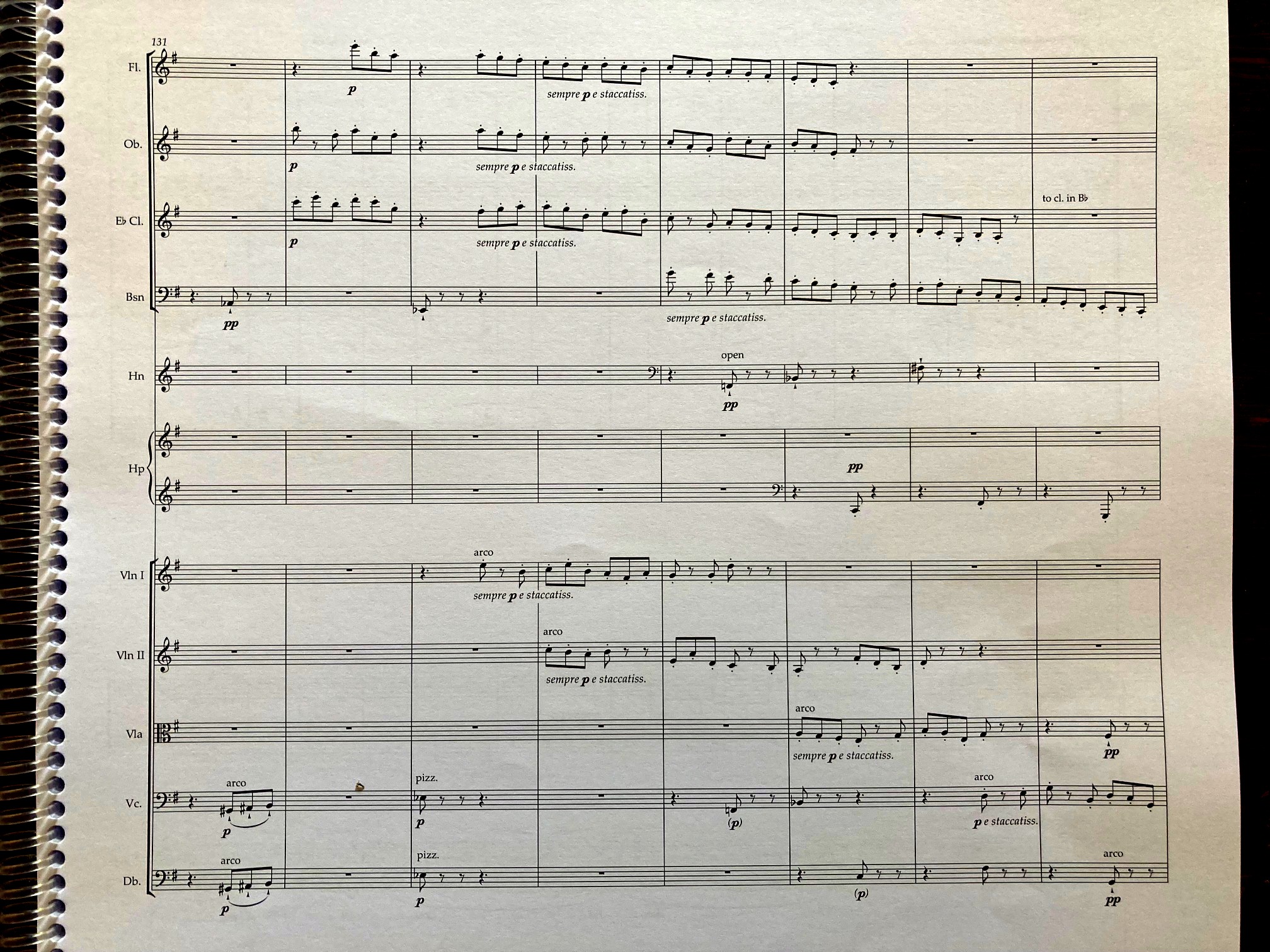 Trying to get into the mind of a 22-year-old genius was a humiliating – and at times humiliating – process [Pictured above: a page from Phibbs’ rescored work]: Britten looked nervously over my shoulder (“please don’t be too demanding of the poor horn player… ”, he might say), although I was somewhat reassured by what I had read about his pragmatic attitude towards instrumental writing. Soon after the war, Britten almost single-handedly created the genre of chamber opera so that new stage works, in a financially crippled England, could flourish and be toured throughout the country. He would later adapt the works of Purcell and others to particular events in Aldeburgh, and was himself working within strict limits for the GPO film unit at the time of Our hunter fathers.

What would Britten think of all this? I like to think that, despite some initial misgivings, he would be delighted to see one of his most original and neglected early works take on a new lease of life. And for my part, if this arrangement introduces a wider audience to this extraordinarily powerful and relevant work, I will consider myself – at least in part – forgiven.