Among the shows that marked the return of live theater to Chicago are three very different musical works that play out differently in the last three decades of the 20th century. Yet these shows also seem to be keenly refracted through the prism of the many upheavals of this moment. As seen now – with the pandemic still lurking and with a masked and vaccinated audience and meticulously watched artists happily returning for live performances after 19 tension-filled months – as well as at the time of their original conception, the result is a intriguing double vision.

Now in its production on tour for the 25th anniversary at Broadway at the CIBC Theater in Chicago, with its carpe diem, live-for-the-moment theme, “Rent” taps directly into this aforementioned phenomenon.

The hit musical, with its book, music, and lyrics by Jonathan Larson, opened Off Broadway in 1996 and quickly transferred to Broadway.

Working a trendy twist on Puccini’s beloved opera, “La Bohème,” its backdrop is the Lower East Side of Manhattan, the Alphabet City neighborhood in the pre-millennial era of the late 1980s. HIV / AIDS is taking its toll and the threat of gentrification hangs over struggling artists and others who are already one step away from homelessness.

The choice of “Rent” to mark the return of the commercial theater in the Loop seems for the moment made to measure. The iconic song, “Seasons of Love,” calculating the “five thousand twenty-five hundred six hundred minutes” in a year, if measured for the time lost by those attending the theater during the pandemic now stands at around 822,900 minutes. And as Larson’s words proclaim, “There is only now”, so live life to the fullest every moment.

Based on the original work by Michael Greif, the current production is directed by Evan Ensign and choreographed by Marlys Yearby. It’s packed with energetic performers – clearly thrilled to have an audience – as well as an excellent five-piece live orchestra led by keyboardist Matthew DeMaria.

A giant metal sculpture made of scrap metal hangs above the stage and suggests the squalid, unheated loft inhabited by emotionally troubled HIV-positive songwriter Roger Davis (Coleman Cummings) who is desperate to secure his legacy with a great song. . Her HIV-positive neighbor is young strip club dancer and drug addict Mimi Marquez (dynamic and acrobatic Aiyana Smash), and her roommate, Mark Cohen (Cody Jenkins), a documentary filmmaker who captures the scene. Cohen’s ex-girlfriend Maureen (Lyndie Moe), a provocative performance artist, dumped him for Joanne (Rala Garske), his lesbian lawyer / manager.

Also in the community are Tom Collins (Shafiq Hicks), a smart, lawless and compassionate teacher living with AIDS; Angel (Javin King), a skin-tight drag queen dying of illness; and Benjamin Coffin III (Jarred Bedgood) as the wealthy new owner of the loft who sells his friends.

“Rent” is more advantageous in theaters a little smaller than the CIBC. And while the high power amplification for this production works in some scenes, in the show it undermined the privacy of other scenes and scrambled a lot of the lyrics.

Tickets: broadwayinchicago.com. The last performance is October 10 at 7:30 p.m. 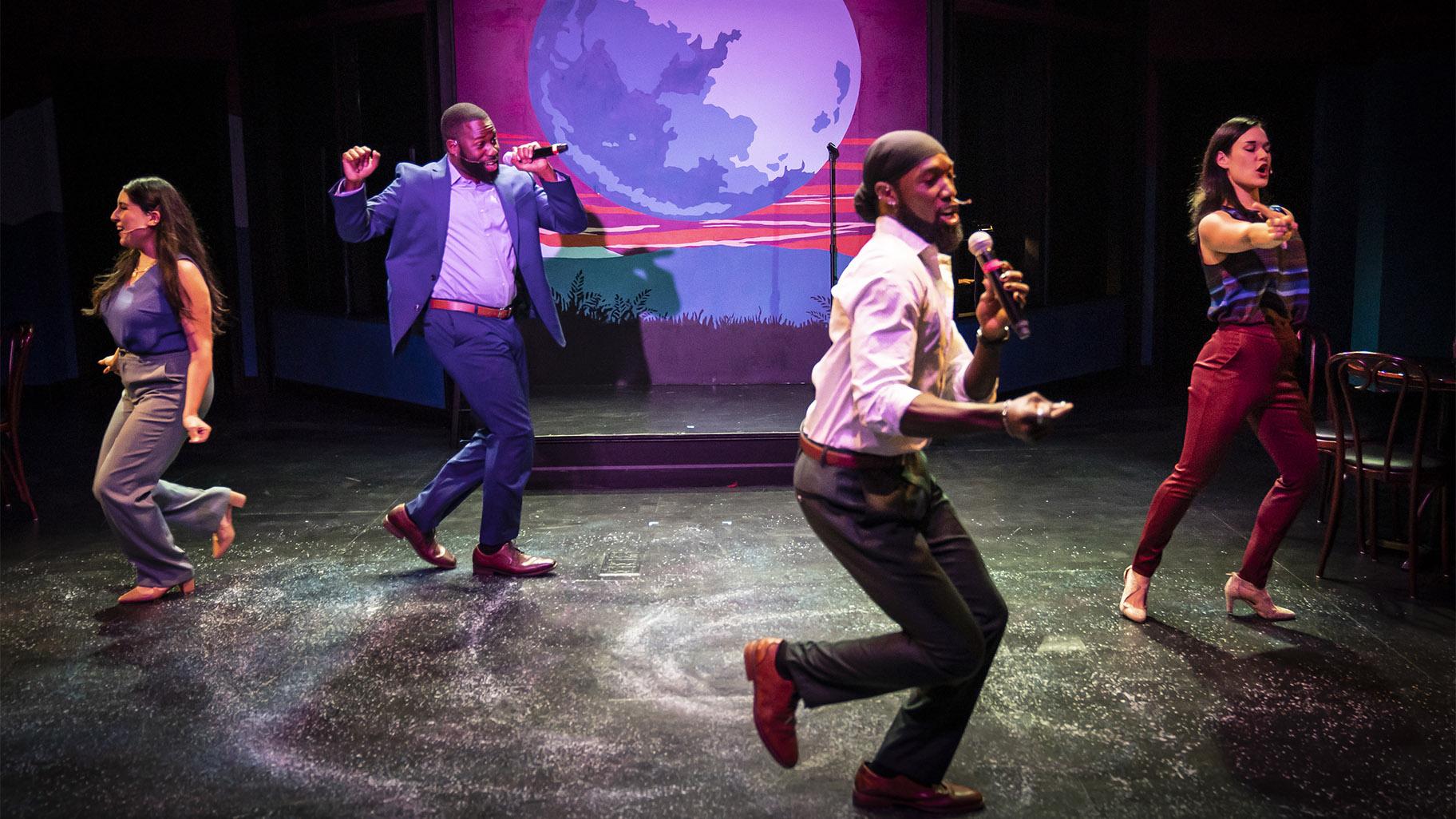 “Songs for a New World”

A crucial key to Théo Ubique Cabaret TheaterThe success of since its founding in 1997 has been the intense intimacy of its space. Performers and audience members are often within inches of each other. And his relatively new home on the Chicago-Evanston border continues that tradition even though it follows all current security protocols and has a somewhat reduced audience capacity to ensure a safe distance.

For the reopening of the theater, artistic director Fred Anzevino turned to Jason Robert Brown’s cycle of dramatic songs for two men and two women, “Songs For a New World”, first produced in 1995. As for “Rent”, the disparate characters defined by the nearly 20 songs on the show that cleverly suggest different personalities, social backgrounds, romantic relationships and musical styles, it feels like the time and place of each of these little ones Musical dramas, predominantly urban and pre-millennial, can easily be seen through the filter of this moment with all of its emotional turmoil.

Under the fluid and energetic direction of Anzevino and choreographer Jamal Howard, the intense, buzzed and physically floating cast of four (Nora Navarro, Emily Goldberg, Eustice J. Williams and Matthew Hunter), suggest many personalities, relationships and lives. crises, with only a few stools, and the integrated theater bar serving as a backdrop. And they are superbly supported by musical director Jeremy Ramey (on piano) and Lior Shragg (percussionist), seated behind a screen.

Brown’s score changes style easily and often, from pop, gospel, and jazz to a Broadway-style belt and clever parody of Kurt Weill. And the performers are equally comfortable filming various crises in life – from a woman in marital crisis to one who declares she is “not afraid of anything”, to a man who sees people depressed. around him and ask the Lord to show mercy and stop their suffering. One of the composer’s most played songs, “Stars and the Moon,” in which a woman realizes that while she was likely to be really happy with one or the other type of dreamer, she foolishly chose to marry a man who could only afford her a life of financial wealth.

If I have a reservation about this show full of talent, it’s that like “Rent” it’s too amplified. Less would be more in this ideal space where privacy is essential.

“Songs for a New World” runs until October 24th. Food and drink, a long-standing feature of the theater, is still available but not required. 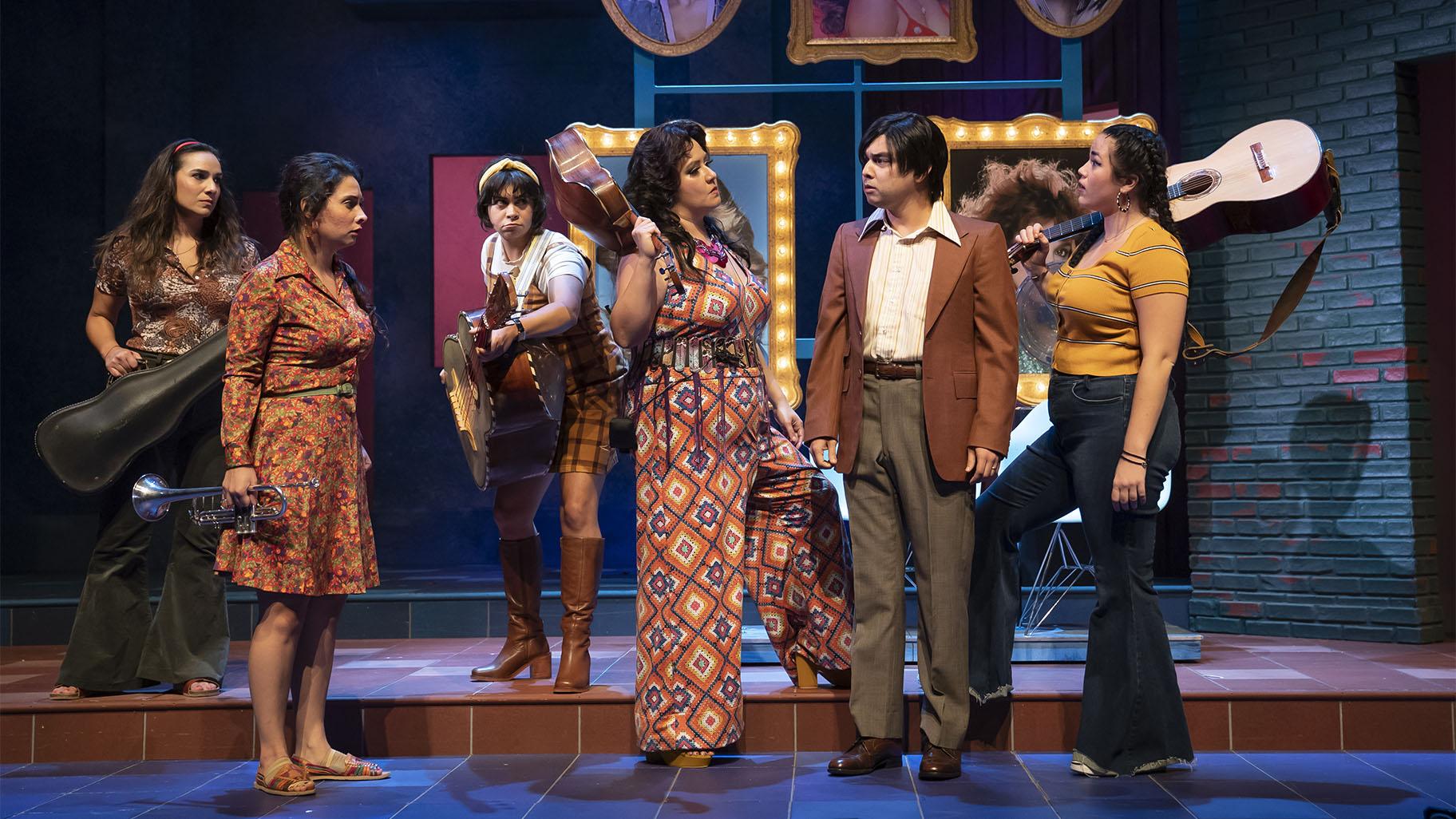 The Goodman Theater is back on stage with “American Mariachi” by Jose Cruz Gonzalez.

The work is set among members of a Latino family as the fledgling feminist revolution of the 1970s – unlike today’s MeToo movement – takes hold. It tells the story of a group of mostly untrained women who decide to boldly challenge an angry father, a repressive husband and most importantly, the long tradition of all-male mariachi bands to form an all-female group. Director Henry Godinez’s production swings between a familiar but heartbreaking family drama and an often overbroad use of farce.

Some of the most exhilarating moments on the show – and I wish there were more – feature the formidable musicians of the all-male group. Sones de Mexico Chicago Ensemble. Dressed in traditional black outfits adorned with silver, the Ensemble play the real thing, standing in front of the dramatic black-walled structure designed by Linda Buchanan and exquisitely lit by Maria-Cristina Fuste.

At the center of the story is Lucha (Tiffany Solano), who tries to balance the demands of her studies with her emotionally intense babysitting duties for her mother, Amalia (Gigi Cervantes). Amalia suffers from dementia and needs to be carefully monitored.

Lucha’s father, Federico (Ricardo Gutierrez), works as a mariachi musician. But Federico carries a long streak of jealousy and rage linked to a mistaken and ancient belief that Lucha had an affair with his then friend Mino (Bobby Plasencia), the owner of a music store. It turns out that it was Mino who years earlier recorded a piece of music that Amalia loved, and it is the sound of that recording that briefly brings Amalia back to herself. These four actors give wonderfully nuanced performances.

When Federico destroys the record, Lucha is prompted by his daringly uninhibited cousin, Boli (Lucy Godinez) to create an all-female mariachi band who will be able to perform the song on the irreplaceable record to which her mother always responds.

This is where the prank comes in as Lucha and Boli recruit the most unlikely members of the group, neither of whom can play required instruments. They include Molly Hernandez in a beautiful twist as Isabel, a gifted church choir singer suppressed by an obnoxiously controlling husband; Gloria Vivica Benavides as Soyla, owner of a beauty salon with great personality; and Amanda Raquel Martinez as Gabby, a mostly distraught geek girl. Of course, there is no doubt how this will all turn out, or that current Mariachi musicians (Juan Dies, Victor Pichardo, Zacbe Pichardo, Rudolfo “Rudy” Pinon and Giovanni Garcia) will be returning to the stage. and will make a really happy noise.